Today we headed south from Jerusalem into the desert region of the Dead Sea. We descended from Jerusalem to Jericho reading the parable of the Good Samaritan as we did, since the man was robbed on this road. It was fascinating to connect the story with the location. We were able to do this with Jesus temptation (Matthew 4) as we saw the place in the wilderness where it is said to have taken place, as well as the stories of Moses on Mt. Nebo surveying the land and Ruth coming from the hills of Moab. It is truly amazing to be in the land of the Bible. Our travels brought us to Qumran where the Dead Sea Scrolls were discovered. After a brief film we enjoyed exploring the sight, learning of the lifestyle of the Essences who copied the scrolls and seeing the caves where they stored them. The wilderness scenery was complemented by the beautiful sunny weather and temperatures reaching over 30 degrees. I wish you all were here but I’m sure you’ll save us some cold and snow for when we get back 🙂

We continued our day with some shopping at the Ahava factory where they make and sell creams made from Dead Sea minerals. As you are probably aware the dead sea is full of rich minerals which are excellent for skin care. After the shopping was over it was back to the bus to head to one of the most beautiful and moving places in Israel – Masada. Perhaps you have heard the story before, but it was here in this mountain fortress that the Jews took their final stand against the Romans. The location was made famous by Herod’s Palace built here, but in the Jewish rebellion in the late 60’s AD it was used as a place of refuge for the fleeing Jews. After Jerusalem was destroyed in 70 AD the Jews took refuge here until 73 AD. The Romans lay siege to the city for 7 months and built a ramp up to its towering walls. After using a war machine to breach the wall the Romans went back to camp knowing that the Jews would be defeated in the morning. When they arrived the next day there was an eerie silence as all the Jews, except 2 women and 5 children who had hid in a cave, had killed each other on purpose to avoid slavery. The Jews today have a saying which we learned in Hebrew that translates “Masada shall not fall again.” The idea is that the Jews never wish to put themselves into the position where they must make the decision slavery or death again. I trust we can appreciate this desire. 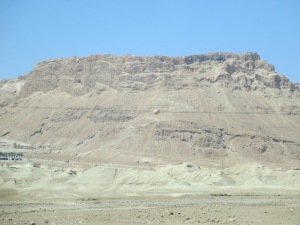 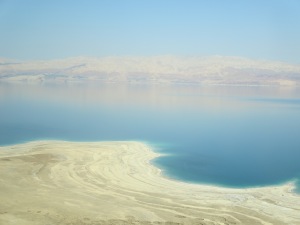 Upon completing our time at Masada we traveled to Mineral Beach where we enjoyed floating in the Dead Sea, slathering on mud, warming up in the Mineral pool and finishing up with a refreshingly cool dip in the fresh water pool. We laughed as we experienced it all and left with our skin feeling cleansed and soft. As we journeyed back to Jerusalem we did make one final stop to try out camel riding. Tara and I were able to go on together and had quite a time! I am certainly more grateful for 21st century travel methods. 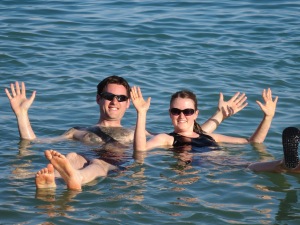 Tomorrow is our free day in Jerusalem and then we pack up to begin our long journey home on Saturday. It has all been an incredible experience and we will share it more fully with you when we return. Trust you are all safely through the storm.

One thought on “Wilderness Wanderings”