Our first full day of touring is now history and we saw a lot of that today! We began our day with a quick walk to the Mediterranean Sea on the shores of Tel Aviv and then got on the bus to head to Joppa. This is the place where Jonah tried to flee from God’s call to preach to Nineveh, where Tabitha was healed and where Simon the Tanner’s house is where Peter had the vision of the unclean animals. It was an exciting start to the day seeing the Bible accounts in their original setting. 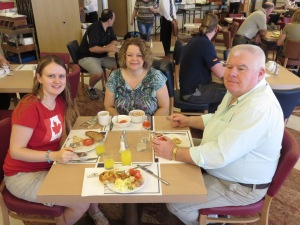 Then we headed up the coast to Caesarea, a city with plenty of ancient history beginning with its founder Herod the Great who built it as a Roman port. The Roman city included Herod’s palace, a theater, amphitheatre and a major temple; all of whose ruins we enjoyed seeing. In terms of Biblical history, this is the place where Peter came to preach Christ to Cornelius and the gospel began to spread to the Gentiles. Phillip also preached here and Paul went through several times; most notably as part of his trial and eventual imprisonment in Rome. It was fascinating to read these passages and walk the streets as they would have.

After this we headed north to Mt Carmel to see where Elijah had his contest with the prophets of Baal and then to Megiddo and the valley of Armageddon. Megiddo is fascinating, being the cross roads of the major route in and out of Egypt. It was conquered and rebuilt 25 times over 4000 years and has ruins of all time periods including King Solomon’s time when he used it as a treasure city and King Ahab’s time later when he used it to house his horses. It was also Ahab who built a water tunnel in order to provide water to the city in case of siege. We were able to walk through this amazing innovation which involved over 200 stairs down and out. Thankfully for the ladies we didn’t have to use it because in ancient times it was a woman’s task to fetch the pail of water! 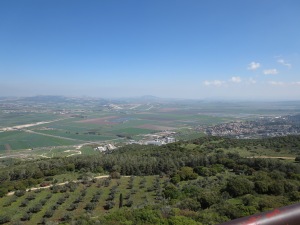 Once we finished up at Megiddo, which we were hurried out of due to the coming Sabbath, we headed to our hotel for the next 3 nights on the shores of the Sea of Galilee. Our room has a balcony overlooking the Sea which provided an incredible view for the late afternoon sun. After an unbelievable buffet supper, where we all ate too much, we headed out for a walk along the shoreline promenade here in Tiberius before retiring to the hotel for rest as we have a busy day of touring planned for tomorrow. We are looking forward to being in many places where Jesus ministered and starting our day with a boat tour on the waters of the Sea of Galilee. 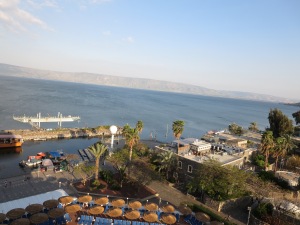 Israel’s tourism slogan is You’ll Never be the Same and I’m confident after tomorrow’s day of walking in the footsteps of our Saviour that we won’t be. Enjoy the pictures and I’ll have plenty to share tomorrow.

P.S. I found this bus, think the deacons would agree for us to pick it up for church ministry?

5 thoughts on “From Shore to Shore”